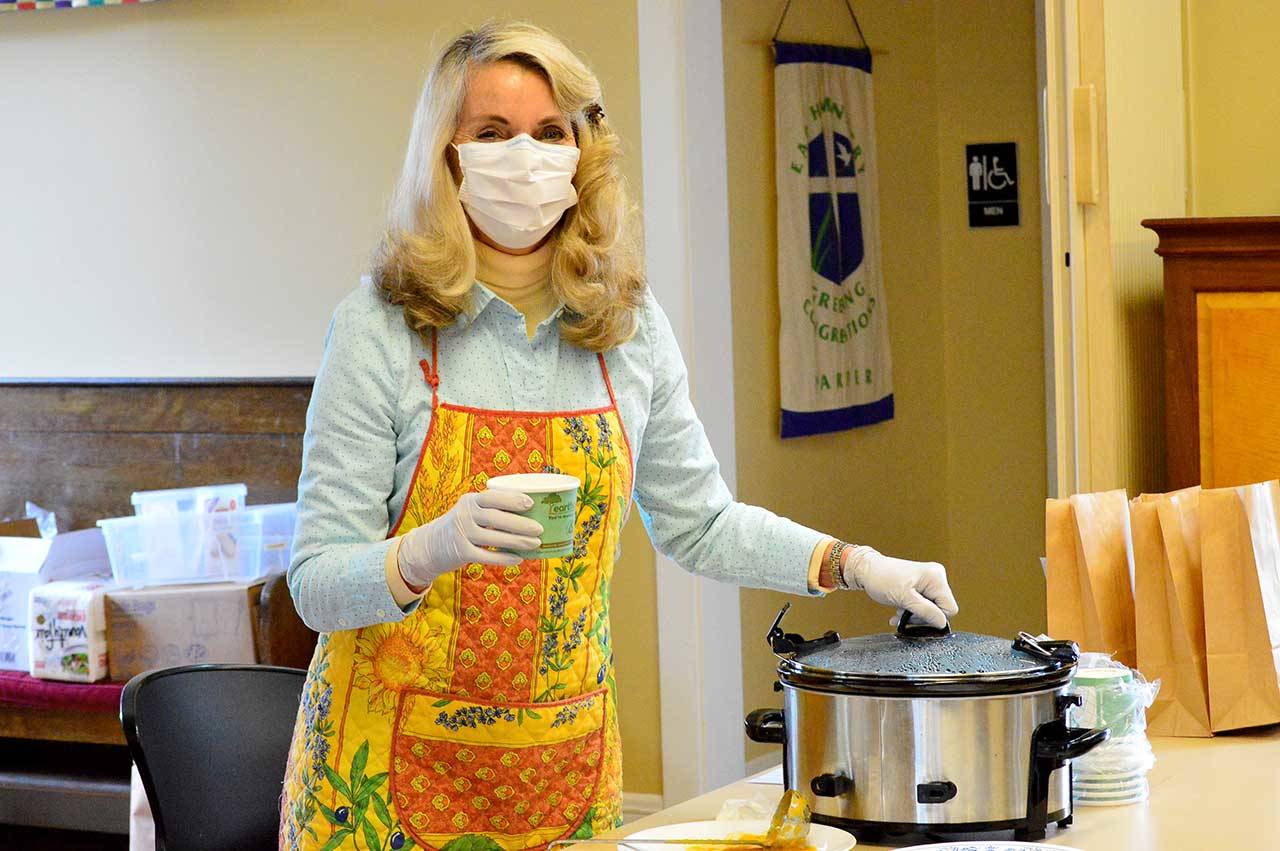 Just Soup is the name, but there is more to it. Come lunchtime in Uptown Port Townsend, there’s bread, fruit and a snack for later. It’s all packed with care alongside a cup of hot soup for anyone who’d like some, “no questions asked,” said Elizabeth Bindschadler.She’s a coordinator of Just Soup days — Tuesdays and Fridays, from 11:30 a.m. to 1:30 p.m. — in and around the St. Paul’s Episcopal Church parish hall at Franklin and Polk streets.“

Our biggest issue right now is getting the word out,” Bindschadler said.“ I’m pretty sure there are hungry people out there. And we’d be very happy if they want to take some soup to their neighbors who are self-isolating or homebound.” After a decade of serving Just Soup as a simple, sit-down lunch once a week, St. Paul’s switched to a socially distanced, twice-weekly model in the wake of the coronavirus pandemic. Last Friday, the assembly-to-delivery line was moving like a sewing machine. The church address is 1020 Jefferson St., but Just Soup customers are asked to drive, bicycle or walk to the parish’s rear parking lot on Franklin Street, where volunteer Reade Simmons stood with a walkie-talkie. As people arrived, he called their number of orders in to the parish hall, where Nancy Smee and Allegra McFarland filled cups of soup and finished packing the brown-bag lunches. Those went onto John Galm’s cart; he pushed them out to a curbside 8-foot table, where customers could scoop them up. Friday’s recipe was a hearty carrot and squash blend. A cup of fruit cocktail, a slice of multi-grain bread and a package of homemade trail mix went with the soup, which is made by Lehani’s Deli in downtown Port Townsend.“ Bon appetít,” McFarland said as she finished packing another lunch for a woman who walked to the parish hall. The St. Paul’s congregation funds Just Soup, Bindschadler said, while a Jefferson Community Foundation grant of $120 per week helped Lehani’s rehire a part-time soup cook. People are also donating money when they drive or walk past. For information, see stpaulsPT.org and scroll down to the Just Soup flier. Fifty-one lunches were hand-packed last Friday, compared with an average of 110 when Just Soup was a sit-down meal.Bindschadler and her crew hope to see their numbers rise, even as they keep an eye on costs.“ We’re looking for ways to economize without cutting down on the nutritional value,” she said.Bindschadler buys the fresh ingredients for the soups; another team of volunteers comes in to cut vegetables on Mondays.“ We’re here for the community,” Bindschadler said. Along with Just Soup, free meals and food are offered by several other organizations on the North Olympic Peninsula. In Jefferson County, Local 20/20 has a list at www.L2020.org. In Clallam County, a list of resources can be found at www.extension.wsu.edu/clallam.

Dreams of My Ancestors