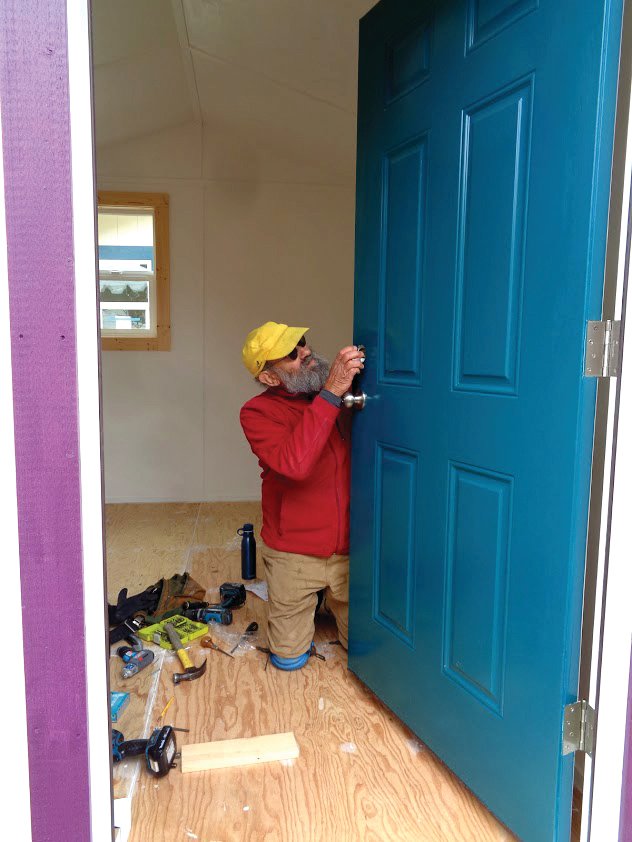 Applicants will need to make it through several rounds of interviews. They need proof of reliable income, because 20 percent will go toward rent. They must be willing to undergo state and federal background checks and be in good standing in their community. Approved tenants are required to help upkeep their community grounds and attend weekly meetings. Tenants share one meal per day in a communal kitchen. There’s 24-hour security on site, easy access to public transportation, schools, medical care, and a grocery store. It’s a weapon and substance-free community, with enforced quiet hours.

Applications can be obtained from Bayside Housing and Services.

Address? Well, it could be a modest lot between Ninth and Rosecrans streets, arguably the most contested soil in Jefferson County right now.

PREJUDICE, PERHAPS PRIDE
“I’m one of those really fortunate people who have lived a really charmed life,” said Debbi Steele.

She moved to Port Townsend in 2007, where she started the Jefferson Community Foundation’s Fund for Women & Girls, and founded the Wearable Art Contest to fundraise for it.

Recently, she’s become involved with the Community Build Project, a volunteer-run organization that helps craft homes for those in need. After trying her hand at slapping on paint, which she admits she was miserable at, she took over as volunteer coordinator.

“We want to build community,” she said, and in this case, that’s literal. She and her cohort, which includes retired construction workers, a local architect, Community Boat Project members, and plenty of concerned citizens, recently completed a village of small shelters called Pat’s Place for Bayside.

The resulting 10 buildings are to be used as transitional spaces — not long-term housing— like all units offered by Bayside Housing. Each tenant applies for 90-day tenancy, and is paired with a case worker who follows each tenant’s trajectory toward independence closely.

Except for special cases — say, involving domestic violence victims, the death of a partner, or the sudden loss of a job — staying any longer in transitional housing goes from helping to “enabling,” said Shanell Rosenfeld, Bayside’s case manger for Pat’s Place.

“There’s such terrible prejudice against what [others] call ‘homeless, I say ‘unsheltered,’” Steele said.

Steele pointed out that the ubiquitous “We love all people” signs found peppering lawns in Port Townsend don’t “include [the] homeless, or unsheltered.”

She’s also said “NIMBYS are both red and blue.”

“All of us know that there is a precarious [housing] situation,” Steele said. “I think there’s a lot of misunderstanding about who are the people who need help.”

Although her own lot is too small to host additional housing, she “would be proud, eager, to have Pat’s Place in my backyard.”

Steele, who was an active participant in the Spring Build open house held Saturday, July 31, where community members could tour Pat’s Place, said the event brought in more than $23,000, much of it specifically earmarked to furnish the 10 structures.

The Amazon Smile donation page on Bayside’s website is relatively untouched. The list of requests ranges from trash cans at $6.54 each, to $259.99 per mini refrigerator. Half of the 12 requested trash cans have been purchased and 11 refrigerators are still needed. Other items range from disinfectant cleaner to laundry bags.

With the village scheduled to open as soon as Bayside gets permission to start putting in the infrastructure on-site at Ninth Street, Pat’s Place is still in desperate need of the basics.

“We need kitchen appliances,” said Steele, and “sinks and toilets.”

NOT ONE AND THE SAME
The greater Jefferson County community has been invited to participate in the build of Pat’s Place and learn with materials provided by Bayside about the location and use of the village. But misinformation from second-hand conversation to randomly distributed fliers, is rampant.

First, Pat’s Place “is not a city project,” said Port Townsend Development Services Director Lance Bailey. It will be run entirely by Bayside Housing and volunteers.

Second, the county is in charge of the community at the Jefferson County Fairgrounds.

The two projects are entirely separate.

Bailey said he “can see where some of that confusion comes in,” and is happy to “clarify that message.”

The term “tent encampments” written up in city code is not as literal as it sounds, Bailey explained, stating the purpose of such a code was to protect from blanket prohibition of those types of communities within city limits.

Bayside’s application for emergency temporary placement of transitional housing is the first application of its kind since the city implemented this new code in 2016.

“This has been a learning process for me, as well,” Bailey said, “trying to understand exactly what this use is.”

As of Monday evening, more than 140 comments had been filed with the city. Public comments closed at 4 p.m. Tuesday, Aug. 17.

It’s been a mix of responses, Bailey said, but thus far those in favor are the minority.

After reviewing the comments and giving Bayview time to respond to the whole of them, Bailey will make an administrative decision that determines if Bayside is cleared to proceed.

An appeal period will follow, and if the decision is appealed, it will go to a public hearing and potentially to county court.

“I hope that this project, if it can be approved, can be as successful as Peter’s Place,” he said.

Peter’s Place is a similar community in nearby Port Hadlock. It’s become such a destination for curious looky-loos that Bayside has posted a sign with visiting hours for one day a week.

“This is their home,” Rosenfeld said, exasperated.

AN INFORMAL POLL
At a city council meeting held Monday, Aug. 16, Joost Besijn, who lives on Ninth Street, spoke against permitting the proposed site, calling it a “homeless encampment.”

Besijn has spent an estimated 15 hours canvassing 162 nearby households around the proposed site. In a pie graph presented to city council, 139 respondents were against the proposal, 16 wanted more information, and seven were in favor.

He added his concern that “the area currently has one of the highest concentrations of low-income families within the city.”

He questioned whether there was a “vaccination policy” for tenants and “how it would be enforced.”

However, no rental units are required to have mandatory vaccinations according to Washington state law.

Besijn further alleged that “pets of the homeless are rarely fully vaccinated and/or neutered.” How he came to this conclusion is unknown, but the only vaccination dogs in Jefferson County are required to have is a rabies vaccine. Sterilizing dogs is encouraged by the city, but not required.

Concerns about drug-testing residents rose to the surface, as well.

“The vetting process does not include drug testing and can only be applied to those who live there,” he said.

Marijuana and alcohol use is legal in Jefferson County, but according to Bayside, is already prohibited on the campus of the proposed village.

DOUBLE STANDARDS
In a statement mailed to community members within a 500-foot radius of the purposed village site, Rosenfeld emphasized Bayview Housing’s “wildly successful” record of serving the community.

“Please do your own research and ask questions,” Rosenfeld said. “Hearsay is not OK. It’s perfectly fine to oppose something if you understand it.”

“The negative comments are the loudest,” Rosenfeld added.

While she does her best to shield Bayside tenants from public vitriol, sometimes it seeps through.

“I do my best not to allow that feedback to get to people,” she said, instead telling them “you are not the ‘they’ that they talk to you about. Your identity is not ‘homeless.’”

“A lot of people have an idea of what this demographic is,” and seem to think “they don’t deserve help or a place to stay,” Rosenfeld said.

The disappointment in her voice was palpable.

“I don’t understand why the people we are serving are viewed as such a danger,” she said.

While the stringent application process and community bylaws are in place to keep tenants feeling safe and comfortable, Rosenfeld thinks it’s “unfair” to ask such a long list of requirements from tenants to simply become a neighbor.

“I’m so happy to talk to people,” she said, but said few people take her up on the offer.

“I’m a believer in self-fulfilled prophecy,” Rosenfeld said. “I tell [my] people, you get to define who you are.”

Rosenfeld and her colleagues have been conducting interviews with applicants for the new housing project but haven’t stated any pre-approvals, since the future location of Pat’s Place remains uncertain.

"Affordability is not our highest priority." This is a direct quote from tonight's public comments by the consultant hired by the City of Port Townsend to work on housing density recommendations that will be considered by the City Council in the next 8 weeks. This is unacceptable. Nothing is more important than making housing affordable for local working people. PT residents, call on your City to protect workforce housing! Everyone can do something. Please send a note to your Commissioners today. Go to HousingSolutionsNetwork.org to learn more. ... See MoreSee Less

Networking our local housing champions. Find resources to create workforce housing, engage as a volunteer, and be part of the solution!
View on Facebook
· Share